from Edward Bunting, The Ancient Music of Ireland (Dublin 1840), page 20: The parts of the harp.

Click the play button to hear it spoken. help 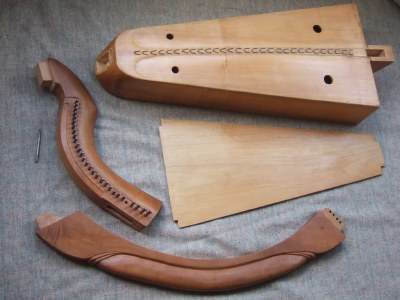 Components of a Gaelic harp disassembled; the com is the upper right part.

Com - Its waist or belly.

Usually coim nowadays, for the 'waist, middle', but com is a fully respectable variant. Eugene O'Curry (On the Manners and Customs of the ancient Irish, London, 1873, vol.III, p.256) tells us that 'Com is the belly or soundboard' of the harp.

O'Rahilly (p.99) explains com as "the 'chest' or forepillar of a harp, i.e. the side furthest from the performer", but he is probably wrong; see Cor and Lamhcrann.

The com of an early Irish harp was usually carved from a single piece of willow wood, hollowed out from behind, so that the sides and front were left perhaps half an inch thick. The back opening was closed by a back panel of a harder timber, which was a press-fit in - no glue was used.